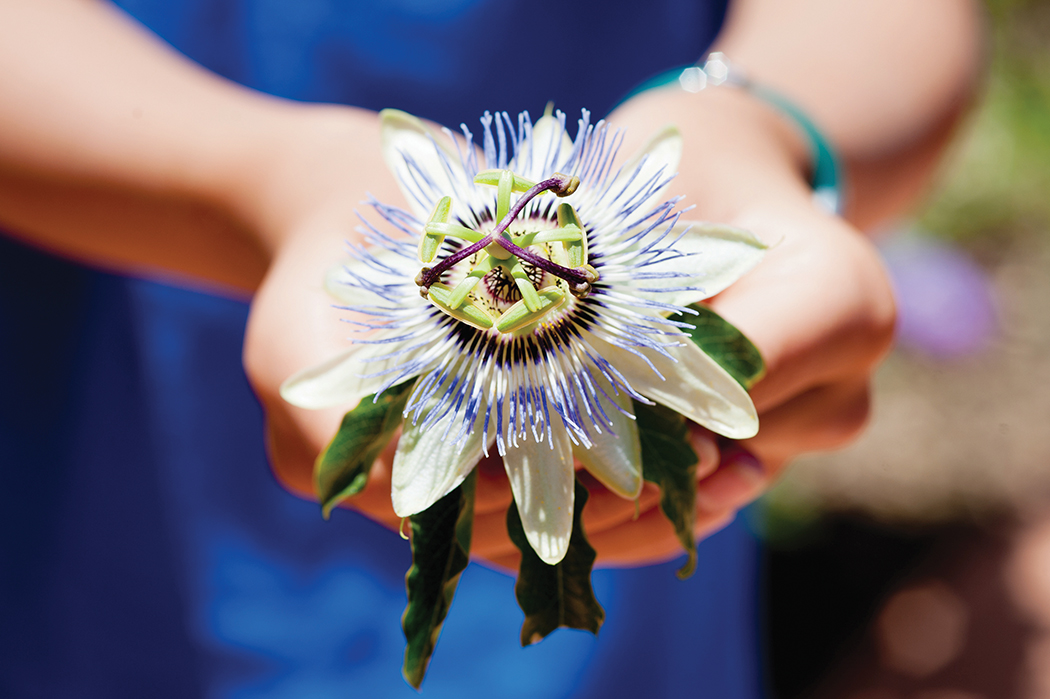 In his 2005 book, Last Child in the Woods, author Richard Louv coined the term nature-deficit disorder, referring to children’s decreasing opportunities to connect with nature compared to previous generations.

The agriculture students at Paul Revere Middle School are reversing this trend by spending time on the school’s almost two-acre farm.

About 200 other students learn at the farm through the horticulture club, which meets weekly during lunch, or come with their families for monthly Saturday workdays to maintain the garden.

“I couldn’t do this without community support,” says Robertson, who received a $3,000 innovation grant in October from the Palisades Charter Schools Foundation to create a riparian habitat at the school. The students have been clearing old plants next to the farm’s native area to make way for a stream that will be bordered by willows, cattails and Matilija poppies, and where students will be able to observe the effects of various farming practices on water quality.

Craig Honda, a longtime biology teacher at Revere, has for years managed the animals on the farm, which include 10 breeds of chickens plus rabbits, guinea pigs and more. Students are allowed to come and hold the animals during nutrition break and lunch. English classes read poetry in the garden and art and photography students document the changing landscape. The farm also features a short hiking trail that leads to a circle of tree stumps, where children sit for council meetings. Part of social/emotional learning, this is where students learn to take turns speaking and listening to each other as they discuss topics ranging from favorite activities to recalling a time you were discriminated against.

Robertson’s former Hale Middle School agriculture teacher Rick Herrera came out of retirement eight years ago to re-start Revere’s agricultural program. When he permanently wanted to step down, he approached his former student from the middle school in Woodland Hills about taking over. Robertson accepted the offer and is now in her fifth year at Revere.

Members of the Palisades Garden Club have come out to help on the farm and there are many regular parent volunteers. Before this school year the 27-acre campus had a full-time gardener, who has since been replaced by a garden crew that works only four hours a week, so the parent and community volunteers are especially important now, says Robertson. “We grow over 40 different crops,” she says, “with the focus being to showcase the major crops of California, including fruit trees, alfalfa, strawberries, grapes and organically grown vegetables. We’re also really excited this year to plant a cotton crop. The family of one of my students owns a cotton farm in Memphis.”

Although the garden is not certified organic, Robertson uses organic practices, such as avoiding pesticides. Everything is reused: the alfalfa is fed to the After a recent assignment, Robertson discovered that they also want to sit still. She had her students find a spot in nature and sit for four minutes, then gather together to reflect on what they saw and experienced. She wasn’t expecting the students to ask her repeatedly to do it again.

“It was nice to sit there and do nothing,” said Skylar Saltzman, a seventh grader. “Especially with everyone on their phones all the time.” Seventh grader Nina Polishook agreed, saying, “It was awesome and very calm.” Robertson lives in the San Fernando Valley with her children, Garrett, a fourth grader at Balboa Magnet, and Jamie, a sixth grader at Revere. She grew up on her father’s cattle ranch in Agoura Hills and raised pigs and cattle while at Canoga Park High School, later graduating from Cal Poly San Luis Obispo with a degree in animal science.

On a recent Monday, the students helped weed and maintain the vineyard where several varieties of grapes are grown. “[Grapes] are a huge part of the state’s economy,” Robertson notes.

“It’s an interesting age,” she says of her students. “They have learned a lot about the history of California [in elementary school] and as they get older they are starting to learn more about the world and how agriculture is a big international business.

“I want to give them a little taste of different careers,” Roberson says. “There are cool, fun jobs in agriculture.”

Since most of the kids have never done this kind of work before, she spends a lot of time emphasizing safety, particularly when working with tools. When a photographer asked the students to pose with their rakes and scuffle hoes, handle down, Robertson joked: “I just spent five or six weeks telling them, ‘Don’t do that with your tool.’”

Although much of the food they grow ripens in the summer, the students still get to taste the farm’s variety. During a recent lunch period, Robertson smiled while watching students have a friendly contest of trying different ways to get the loquats off the tree.

A passion flower from the school garden. Photo: Lesly Hall

Trumpet vine, one of the the many varieties of flowering plants in the garden. Photo: Lesly Hall

A monarch butterfly comes in for a landing on the garden’s butterfly bush (Buddleia). Photo: Lesly Hall

A lizard is spotted through the California poppies. Sweet peas can be seen in the background. Photo: Lesly Hall

By May 18, 2016
in Uncategorized
Related Posts
Comments
Leave a ReplyCancel reply