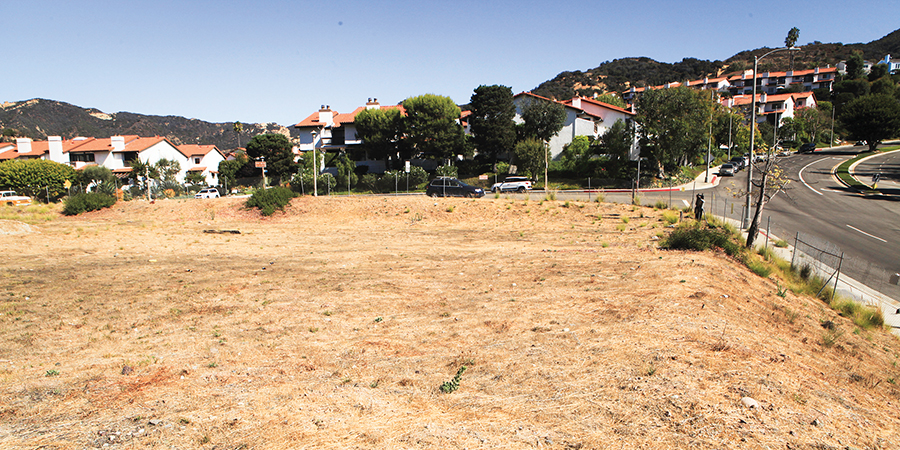 An appeal hearing at the West L.A. Area Planning Commission on April 18 lasted almost 3 ⁄2 hours as each side argued about the proposed 64,646- sq.-ft. eldercare project at 1525 Palisades Dr. in the Highlands.

The four-floor, 82-unit facility would be built on a long-vacant 43,097 sq. ft. lot at the corner of Palisades Drive and Vereda de la Montura, just above a small business complex to the south, across the street from condominiums on the east and north, and adjacent to open space parkland on the west.

That approval was appealed to the planning commission by Jonathon Klar and Robert Glushon of Luna & Glushon (for Robert and Sandra Flick), on the basis that the project did not meet the requirement for Class 32 of the city’s CEQA Guidelines, which provided the environmental clearance for the project.

Ben Resnick, attorney for applicant Rony Schram, said, “The standard of review is that in order to have a reversal, there has to be an error: an error in a misapplied law or a mistake in a calculation.”

In his final statement Commissioner Newhouse asked, “Do we have any substantial evidence that what the city did was an error?” He added, “We need actual evidence [to find for the appellants].”

He pointed out that the building, which would be built in a high-fire-severity area, had raised numerous questions about evacuating the elderly, but that the city had testimony from LAFD assistant fire chief Patrick Butler, who had not viewed the facility as an unusual situation.

Newhouse acknowledged that one of the environmental concerns was traffic, but appellants had not presented any evidence to contradict the city’s report that the project did not meet the threshold for a traffic impact study.

Newhouse, who lives in Venice, knows the area: he hikes frequently in Los Leones Canyon and also played flag football on the Calvary Church property (just below the Highlands) for about 10 years.

“We’re talking about a lot that has been vacant,” he said, noting that if the project was located farther into the park, that might make a difference. He added that his background is nonprofit environmental law.

Newhouse stated that something will eventually be built on the lot and that an eldercare facility seemed noble compared to other possible uses.

Commissioner Waltz Morocco said, “I agree with Newhouse.” She noted that as she read all of the paperwork and reviewed the exhibits regarding the facility, she was looking for a project that cut into the canyon or something that degraded the view, but in- stead sided with the city. “I believe it’s an ‘urban infill.’”

In making its determination, rather than relying on an environmental study through CEQA and a mitigated negative declaration, the city used Class 32. (The Class 32 “infill” Categorical Exemption—CEQA Guideline Section 15332—exempts infill development within urbanized areas if it meets certain criteria).

The criteria defined by law includes: a.) The project is consistent with the applicable general plan designation and all applicable general plan policies as well as with applicable zoning designation and regulations; b.) The proposed development occurs within city limits on a project site of no more than five acres substantially surrounded by urban uses; c.) The project site has no value as habitat for endangered, rare or threatened species; d.) Approval of the project would not result in any significant effects relating to traffic, noise, air quality, or water quality; e.) The site can be adequately served by all required utilities and public services.

“What struck me was the sheer passion and intelligence of this community,” Waltz Morocco said, but “the zoning administra- tor did not err.”

Margulies, whose mother once lived in the Atria assisted living facility on Sunset Boulevard, summarized: “There is support for senior housing and I also feel that there has not been an adequate study for the open space and the site.

“But we have a standard of review,” she said. “Experts, on the city level, have come out one way and I don’t have anything telling me otherwise.”

After the vote, Flick told the News: “I was very disappointed at the APC’s denial of my appeal. Many important factors were ignored by the commissioners in reaching their decision. I have avenues of appeal available relative to CEQA and the coastal act, and I intend to pursue them.”

Pacific Palisades Residents Association President Sarah Connor, who spoke in favor of the appeal based on environmental issues, said “We will continue to work hard to preserve the integrity of our coastal laws. Our next step will be to support the appeal at the Coastal Commission.”

By May 7, 2018
in Uncategorized
Related Posts
Comments
Leave a ReplyCancel reply

Dress to impress this season with a custom look from Brandi Titkos x Vince. By Susan Payne Menswear wardrobe consultant...