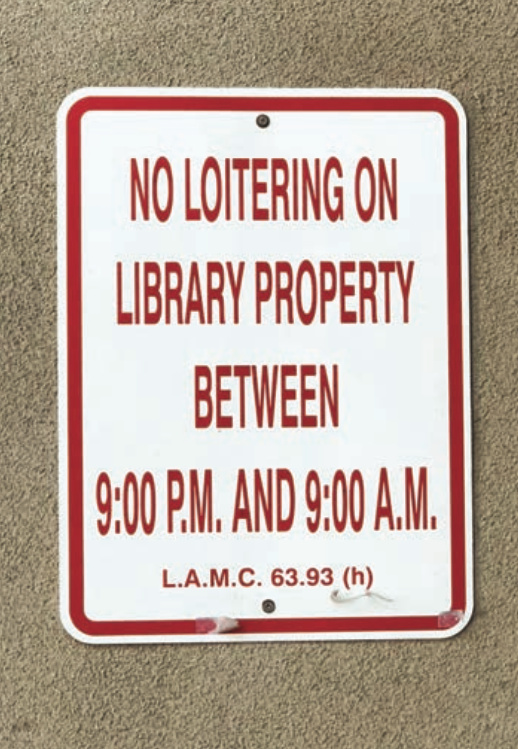 At the Santa Monica Canyon Civic Association meeting on January 9, Pacific Palisades Task Force on Homelessness (PPTFH) Enforcement Chairperson Sharon Kilbride said that when the task force started two years ago, in addition to a large number of homeless who were passing through, there were about 57 service-resistant homeless living here permanently. Now the number of transient “residents,” has been reduced to about six.

One of the women, who has been in town for more than a decade, has been sleeping overnight near the library front door. She uses the handwipes by Ralph’s front door to clean her face and hands. When not looking for cans and bottles, she also sometimes is seen resting inside the library when it is open.

A new sign has been posted that prohibits loitering or sleeping outside the library at night. LAPD Officer John “Rusty” Redican cited the woman, and then a PPTFH social worker and a nurse spoke to her. The plan is to eventually to try to convince her to take housing.

Clyde, a service-resistant individual, has been living under Gladstone’s for 12 years. He was being monitored by PPTFH for the past six months and his health was deteriorating. He was placed in the hospital under a medical hold on December 21. The outreach team plans to follow up with him with housing once he is well.

Clyde was initially brought to the attention of the task force because of complaints from Gladstone’s and beach goers.

The number of new transients coming to Pacific Palisades, especially those who stop in the Village or near Vons and Gladstones, has gone down over the past few weeks. Interestingly, this coincides with a change in a bus route.

“The 2-302 Metro Bus that came from Koreatown to Sunset and PCH brought many of our homeless to the area,” Kilbride said, noting that the line now ends at Veteran and LeConte, where bus riders must exit. “Our numbers of homeless folks coming into our city has dropped since this change occurred about three weeks ago.”

Kilbride said there had been an increase in those living in their cars and RVs along the beach.

Finally, Timmy was taken by an ambulance to UCLA on January 11. He is currently on medical hold.