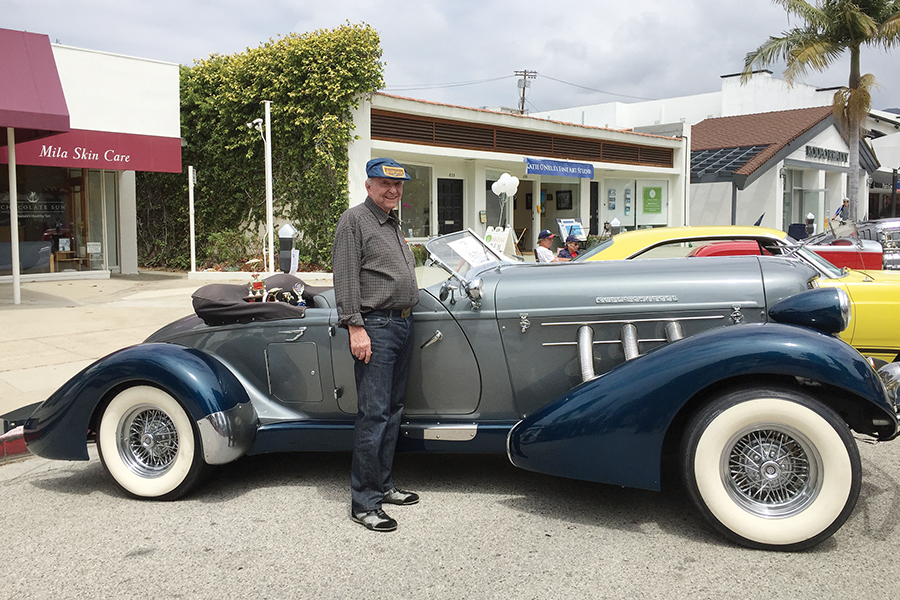 While working for years in various parts of the world for Tupperware, including Indiana, Ohio, Australia, Canada and India, Sylvia and Jon Boyd lived in Westchester and Pacific Palisades between relocations.

“While off work, Jon spent all his time off building a gorgeous Gatsby-style car— a 1936 Auburn,” said Sylvia, his wife of 67 years.

The project began in 1976 when John bought a kit that consisted of different parts from different Auburn cars. “All the parts arrived on a flatbed with an engine in the middle and all the parts laid on top,” Sylvia said.

Jon assembled the pieces into the classic Auburn twice, spending more than a year on the first one.

He then took the car apart so that it could be sent away for a paint job. When it was returned to him, it was once again all in pieces. This time it took Jon only four months to reassemble the car because the engine had been left intact for the painting process.

Thousands of Palisades residents saw the car, because Jon—a Marine who served in the Korean War—drove it in countless Fourth of July parades. He also entered it in numerous car shows, earning 16 trophies, many of them for first place.

In early 2016, Boyd decided the time was right to sell the car. A fellow in Texas purchased it and said his plan was to have fun with it for year, drive it all over town and sell it the following year.

“Seems like that’s exactly what he did,” Sylvia said, because in January this year, the Boyds received a strange Facebook “Messenger” communique.

It read: “Do you know a Jon Boyd who built a 1936 Auburn?” Signed Leif Arskog. Sylvia responded, “Yes, that’s my husband.”

Arskog continued to communicate with Sylvia, telling her that he was enjoying Jon’s car in Stockholm, Sweden.

Jon is not on Facebook or any social  media, and Sylvia was not sure how Arskog figured out that she was the Auburn owner’s wife. “Maybe my name was also on the pink slip,” she said.

Arskog had lots of questions, so Sylvia told him that the Boyds were taking their annual family trip in September and would be boarding a ship in Stockholm, that would take them on a 15-day cruise in the Baltic Sea.

Arskog quickly offered to meet the family at the dock and take them to lunch. He told Sylvia that he lots of questions for Jon about how he built the car and revealed that he had reupholstered it with new leather and installed a new dashboard.

The Boyds, who placed three of his trophies from the car shows in the car when they sold it to the man in Texas, are planning to bring a few more for its Swedish owner.

“Jon is so eager to see his beloved Auburn like brand new again,” Sylvia said. “We are certainly looking forward to it and so are the kids.”

The Boyds have two children, Lorna and Leslie, and two grandchildren (a third is deceased).

Sylvia has headed PAPA People (the many volunteers who help with the town’s Fourth of July parade and fireworks show) for 12 years. Her daughter Lorna is shadowing her this year to take over the role.

By May 24, 2018
in Uncategorized
Related Posts
Comments
Leave a ReplyCancel reply