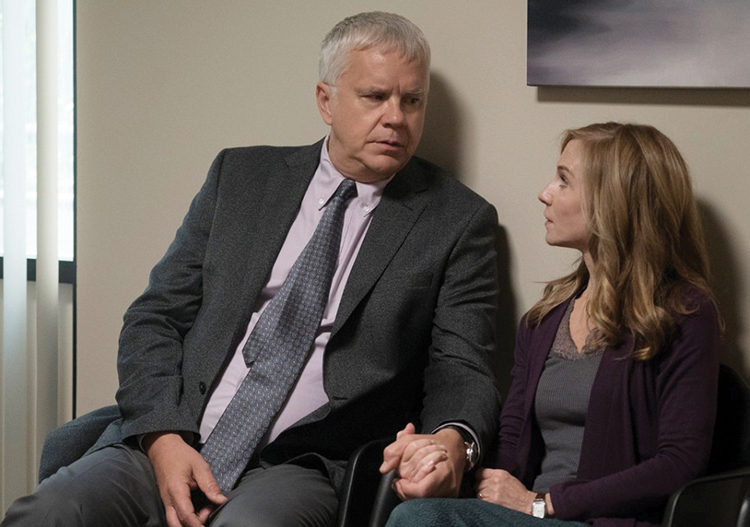 By Bernice Fox
Special to the Palisades News

TV shows often are about make-believe. And when it comes to locations, many try to make viewers believe that City A really is City B.

That’s how it is with the upcoming HBO series, “Here and Now,” created by Alan Ball, known for “American Beauty,” “Six Feet Under” and “True Blood.”

Though some of “Here and Now” is shot in Portland, Oregon, where it’s set, much is filmed at Paramount Studios in Hollywood, along with lots of footage in Pasadena, and some scenes in Pacific Palisades and Brentwood.

“Here and Now” centers on a family with Holly Hunter and Tim Robbins as the parents. They have three adopted children from three countries and of different ethnic backgrounds. And they have a biological daughter.

“So, it’s sort of a blend of all those backgrounds and ethnicities coming together,” says producer Steve Oster, who notes that the show is “set against the background of Portland, which is its own blend of various cultural approaches kind of all living together.”

The adopted kids, who joined the family when they were little, are from Colombia, Liberia and Vietnam. They’re now all young adults.

In keeping with this cultural view, Robbins plays a philosophy professor and Hunter’s character runs a nonprofit called The Empathy Initiative.

Producer Oster explains that The Empathy Initiative is “basically about getting people to come together and find their areas of agreement, by seeing where someone else is coming from, being empathetic for their experience, and trying to come to places of understanding and agreement.”

And that’s what brought cameras to the Castellammare neighborhood of Pacific Palisades last fall.

Oster tells the Palisades News that a large, modern home with a sweeping wood facade, which he describes as “architecturally unique,” is playing the Portland home of Hunter’s colleague. The colleague is “kind of an Elon Musk sort of guy, ultra-rich but involved in all kinds of projects that are intended to kind of help progress the condition of life on the planet.”

This Castellammare home was chosen, Oster says, “because the nature of the character was someone who clearly had money but showed it in an interesting way rather than opulent. The house itself is sort of a work of art. That’s sort of who that character is. So, it was really about something that would put across that idea of a person who’s obviously a very wealthy guy, and also has a unique aesthetic.”

Cameras and the crew actually came to this Palisades home twice last fall. In October, they had set up and were ready to press “record” when word came that Holly Hunter was sick and couldn’t do her scenes. So, they packed up and left.

The trucks, lights, porta-potties, generators, cameras and crew returned a few weeks later in November to try again. That’s when Hunter emerged from a studio van and went into the house to film.

The Brentwood location is the Leylie clothing store on Barrington Place. Oster explains how the daughter from Liberia “owns an online clothing company which also has a brick-and-mortar boutique. So, the dress shop is this boutique.”

HBO describes “Here and Now” as “darkly comic.” Oster agrees, saying “it’s Alan Ball, after all. Alan Ball always injects a sort of quirky sensibility into his observations of life.”

Part of that quirkiness includes a possible supernatural angle. Oster tells the News, “The youngest son, Ramon, has recurring visions that haunt his dreams and come into his mind. And that’s part of his process and part of what kind of brings the family together to try to kind of figure out what’s going on. And there’s interaction with a psychiatrist-character as well that runs through the whole first season.”

Not one to reveal spoilers, Oster won’t say if these visions could be paranormal or the product of the son’s active imagination. “That’s part of the discovery through the series,” he says. “That’s kind of their process, figuring out if these are just things that he’s seeing or if there’s actually more of a supernatural component to it.”

The Palisades home and the Brentwood dress shop are in one episode later this first season. Oster says it’s “hard to know right now” if they’d be used in a possible second season.

“Should there be a season two, the writers are actually just getting together to talk about what season two might be. So that’s all very much kind of a work in progress.”

Oster, who previously worked as a producer on “Star Trek: Deep Space Nine” and “Grimm,” says as far as he and the “Here and Now” team knows, the welcome mat is out if they want to return and film at locations like the home in the Palisades.

“We sure hope so. We do our best everywhere we go to treat the neighborhoods well, so we can come back again.”

“Here and Now” premieres Sunday on HBO. There are 10 episodes in this first season.