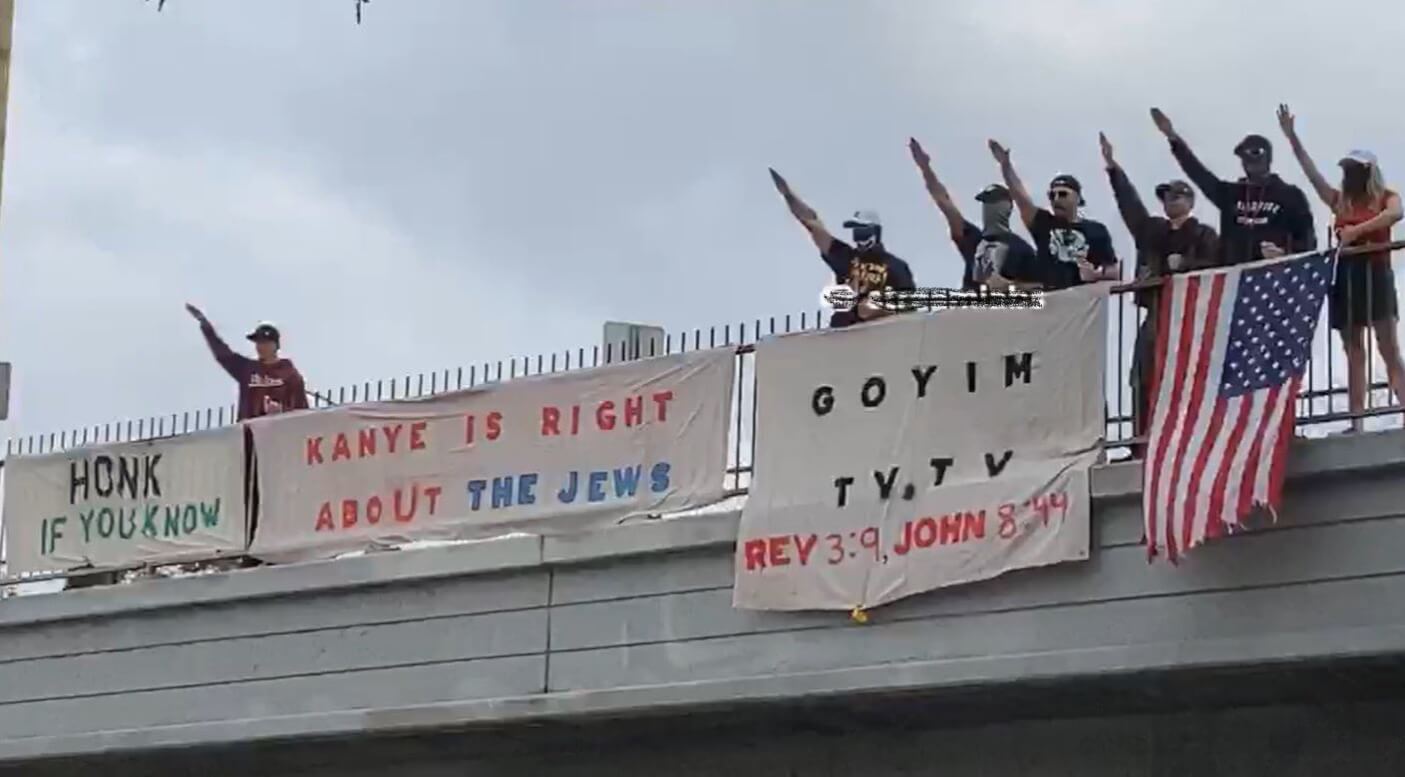 By Sam Catanzaro and Dolores Quintana

There has been a sudden and alarming uptick of racist and antisemitic activity on the Westside after Kanye West’s repeated antisemitic statements and actions this month.

This past weekend, an antisemitic group called the Goyim Defense League or GDL – a mockery of the ADL or Anti Defamation League – hung antisemitic banners over an overpass of the 405 Freeway close to Howard Hughes Parkway. A Twitter user posted a photo of the sign simply titled, Nazis on the 405 in Los Angeles. Oren Segal, Vice President, of The ADL Center on Extremism, posted a similar photo that was captioned Hate In America. One of the antisemitic signs said, “Kanye Is Right About The Jews”. In the photos, the members of the group are seen giving a Nazi salute. According to ADL.org, the leader of the group is Jon Minadeo II of Petaluma, California. Goyim is a derogatory Hebrew and Yiddish word for non-Jewish people.

In the tweet thread, Segal said, “This action is the latest example of how extremists across the ideological spectrum have embraced Ye’s recent comments.”

Also over the weekend in Westwood, City Council candidate for District 5, Sam Yebri, an Iranian Jewish man, tweeted that antisemitic flyers had been dropped off at his house and those of his neighbors. Yebri also included a photo of a flyer from the previous week that spewed virulent antisemitic rhetoric that had been found at The Grove and in the Pico-Robertson district.

Similar flyers were also found in Brentwood and Bel Air. According to the Brentwood Community Council (BCC), these flyers were thrown from a vehicle traveling along many streets throughout Brentwood, including in the Brentwood Glen, as well as along North Barrington, North Saltair, North Bowling Green Way, South Woodburn, South Gunston and South Kenter. Each homeowners association representing these areas has been collecting information from their residents and relaying this information to LAPD and the ADL, the BCC noted.

“We understand that these flyers were distributed between 1:00 am and 2:30 am, as one resident captured video footage of a car distributing the anti-Semitic flyers. If you live on one [of] the streets that was targeted, and have security cameras that capture street activity, it would be very helpful if you could check your video footage to determine if you captured anything useful for law enforcement,” the BCC wrote in an email newsletter.

These antisemitic incidents have drawn condemnation from both local and federal officials. Councilmember Paul Koretz represents District 5, which includes Bel Air and Westwood. Koretz himself is the son of a Holocaust survivor.

“Disgusted and disheartened are just two words that describe my feelings about the latest acts of antisemitism in Council District Five,” Koretz said. “Unfortunately, these types of incidents have become all too common in Los Angeles and nationwide. As a son of a Holocaust survivor who has made ‘never forget’ central to my personal mission to lead with compassion and treat all others with dignity, I am incredibly dismayed that this kind of discrimination and hateful propaganda continues to grow in today’s day and age.”

In a press release, Koretz pointed out that the ADL’s Anti-Semitic Incident Audit has shown a startling rise in antisemitic hate incidents and crimes in the Los Angeles area. According to the ADLL, antisemitic incidents rose 29 percent in 2021 and 217 percent from 2017 to 2021.

This is the second time in recent months that these types of antisemitic acts have taken place on the Westside. In late August, hateful flyers were distributed to homes in Brentwood and Pacific Palisades. According to the BCC, flyers in August were distributed on Kiel Street, Church Lane and Beloit Avenue.

In the wake of the August incident, Congressman Ted W. Lieu (D-Los Angeles County), Co-Chair of the Bipartisan Anti-Semitism Task Force, called on the FBI to launch a formal investigation. Following the antisemitic events this past weekend, Lieu voiced dismay at the lack of response by the FBI.

“Every day it feels like there is a worsening pattern of anti-Semitism in our country. We’re seeing national figures spew hurtful and problematic statements, which has given cover to others who want to act on their own bigotry and terrorize our communities. My heart breaks for my Jewish constituents who are once again on the receiving end of this kind of vitriol,” Lieu said in a statement. “In August, following another instance of antisemitic flyer distribution in my West Los Angeles district, I called on FBI Director [Christopher] Wray to open an investigation into these targeted acts of extremism and asked for an update on the latest developments. I have not heard back from the FBI in a substantive way and am disturbed that, this weekend, our neighbors are once again being terrorized by similar acts of hatred. I am dismayed by the lack of progress on curbing these anti-Semitic acts, or at least the failure by the FBI to publicly reassure our community that it is taking this matter seriously.”

Kanye West, now known as Ye, has been known for some time for his erratic and volatile behavior as well as his mental issues, but his actions have taken a turn into virulent hate speech of late. Starting on October 3, Ye, Candace Owens and an unidentified model wore White Lives Matter t-shirts at the Yeezy Fashion Show in Paris, France.

On October 6, Ye went on Tucker Carlson’s Fox News program and footage from the interview was released by Vice’s Motherboard. During the interview, West stated the belief that Black people are the real Jewish people saying, “the 12 lost tribes of Judah, the blood of Christ, who the people known as the race Black really are [sic],” repeated a conspiracy theory that Planned Parenthood is a collaboration between the KKK and Margaret Sanger to “to control the Jew (i.e. Black) population.” In addition, Ye said it was impossible to call him antisemitic because since he is Black, he is really Jewish.

West’s accounts on Twitter and Instagram have been suspended and the tweets and shared posts have since been removed by the social media platforms Twitter and Instagram for violating their terms of service policies. The tweets in question are the ones where West implied that Jewish people were controlling other music artists in an attempt to intimidate him and that he could not be intimidated in that way. The tweet stated that he intended to “…go death con 3 ON JEWISH PEOPLE” and repeated his belief that he cannot be called antisemitic since he believes that he is Jewish.

The chorus of voices calling for businesses and brands with partnerships with West to drop him grows louder with each day. Fashion house Balenciaga, Vogue Magazine, West’s new legal counsel and his agency CAA have dropped him and a documentary about West has been shelved by MRC. This week, after three weeks of review, and pressure on social media, Adidas “terminated” their partnership with West.