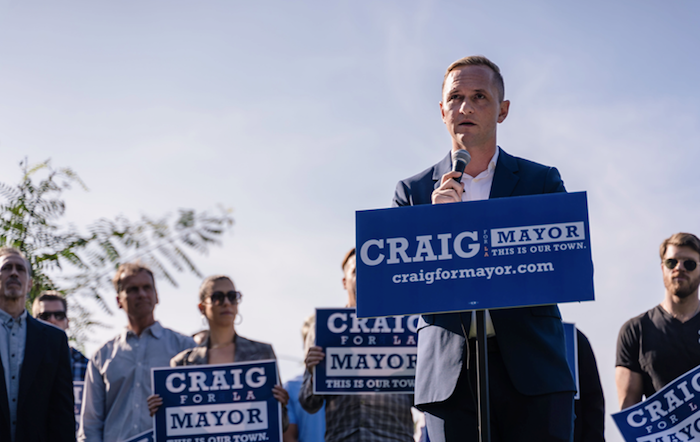 LA mayoral hopeful Craig Greiwe is a pragmatic, solutions-based private business executive who believes the issue of homelessness is being eradicated throughout the United States except for Los Angeles and that’s because the people running against him are the very individuals who created the problem in the first place!

A former chief strategy officer of Rogers & Cowan/PMK, Greiwe has made a career out of turning around major FORTUNE 500 companies and he wants to apply that skill set to fixing a very dysfunctional place known as Los Angeles.

A graduate of USC and Columbia Law school, Greiwe sees himself as the only man with a real plan.

On the number issue of the race, the candidate praised the LA Alliance lawsuit settlement with the city a “significant step forward, but not going far enough.”

“Homelessness is being eradicated virtually everywhere except LA. I’m the only candidate calling for federal intervention.”

As mayor Greiwe would invite President Joe Biden to Los Angeles so that he would see for himself the consequences of decades of poor leadership.

Calling LAHSA (Los Angeles Homeless Services Authority) an “unmitigated disaster,” he would remove the city from this two-tiered bureaucracy.

“While my opponents in this race are seeking a power grab, I will utilize federal law and the appropriate intervention to solve the problem.”

The candidate referred to the catastrophe of Hurricane Katrina as being “ten times the problem” of LA’s homeless issue and that city leaders have simply ignored this moral tragedy.

“Career insiders have no incentive to deal with homelessness.”

Admitting his race is an uphill affair from a logistics and fundraising perspective, the candidate was delighted by the spending spree currently from developer Rick Caruso, the billionaire businessman who resides in the Pacific Palisades, the richest and most affluent neighborhood in all of Los Angeles.

Greiwe now believes the massive campaign spending of Caruso has brought to the forefront a mayoral election forthcoming, something 80% of the general public did not know several weeks ago.

And despite the huge media purchase by Caruso, Greiwe believes the ultimate outcome will be a runoff.

“My opponents are educating the public on their failures.”

Greiwe stressed his campaign is a much more focused, targeted and ultimately the most effective and persuasive message that will resonate with voters.

From a strategic outlook, he believes he needs to reach some 700,000 registered voters who are engaged and then focus on the 400-500,000 who are persuadable and seeking real solutions to tough problems like homelessness.

The hopeful described the current overtime frenzy of LA employees as “total insanity,” and accused current city officials as an example of “no one minding the store.”

“There is no political will. My opponents are too afraid to engage the cost and size of city government.”

Greiwe pointed out while the population of Los Angeles has remained relatively the same, the budget and expenditures have exploded from $8.2 billion to $11.2 billion today.

“Government is not a business. We need too hold it to a standard while 70% of tenants struggle just to pay their rent.”

When asked about the city’s utility, the candidate questioned how cost was being calculated to service. When asked if he would consider selling this nearly $2 billion dollar bureaucracy, he said all options should be on the table for discussion.

The candidate indicated he has been to Venice several times and is well aware of the encampments and rising crime currently congregating at the Centennial Park median, just due east of the Free Public Library on South Venice Boulevard.

Greiwe stressed he has made no endorsement in the highly competitive campaign to replace retiring Councilman Mike Bonin, who was run out of the race by a recall drive that gathered some 26,000 signatures across the district.

“The current council members for the most part are institutional creatures with no spine. With Mike and Traci in the race we finally have a shift in direction and purpose.”

“One of them will be part of a common sense core for a new city council. A Traci Park/Mike Newhouse run-off would be the best result in CD-11.”

Greiwe also stressed that he supported the recall of Mike Bonin and has endorsed the candidacy of Venice Community Officer Nico Ruderman, a proponent of that recall effort that gathered 95% of the required petitions to oust the two-term incumbent.

Ruderman is seeking the vacant assembly seat in a very competitive four-way race come Tuesday, April 5th where many believe that contest will in all probability go to runoff as well.

Greiwe is from humble origins as he grew up in poverty in rural Indiana and he wants to apply those struggles of food and housing insecurity to the current crisis of homelessness here in LA.

While the field is crowded, Greiwe is convinced such first-hand struggles along with a specific, published plan-of-attack to address rampant homelessness, rising crime and the overall deterioration of the quality of life here in Los Angeles compounded by COVID makes his candidacy the right message at the tight time and the only real outsider to the office in more than 80 years.

The author is a longtime Venetian and member of the Oceanfront Committee of the Venice Neighborhood Council. He can be reached at (310) 621-3775 or via e-email at nantoni@mindspring.com