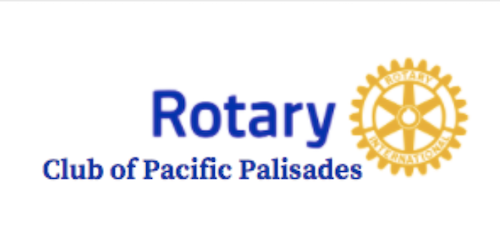 Matthew Rodman the award for Business Person of the Year

The Pacific Palisades Rotary Club has returned to in-person meetings as of April 12 as reported by the Palisadian Post.

The first meeting took place at their new meeting place Modo Mio and the first guest speaker after the hiatus was the owner of Modo Mio, George Zaoui.

Holly Davis, former Rotary president and board member, said, as quoted by the Palisadian Post, “Our first in-person meeting post-COVID was well attended and everyone enjoyed the food and the pleasure of each other’s company and saw the smiles on our faces in person rather than Zoom. During the pandemic, Rotary continued with community involvement and money donations to the many causes Rotary supports [including the] Food Bank, Village Green, school scholarships, Meals on Wheels and more. As COVID appears in the rearview mirror, Rotary is optimistic about continuing and making greater strides.”

During the meeting, the Rotary gave Matthew Rodman the award for Business Person of the Year of 2021 according to the Palisadian Post. He received this distinction because of his dedication to and involvement with the Pacific Palisades Community.

Rodman has lived in the Palisades for over 20 years and his list of contributions to the community is quite extensive. He has also been awarded the Golden Sparkplug award from the Community Council of the Pacific Palisades for his work on solving the traffic problems around the Paul Revere Middle School.

Davis said, as quoted by the Palisadian Post, “[He] has demonstrated leadership and involvement within the Palisades community and demonstrated a character of ‘Service Above Self. When selecting the nominee, the Rotary voting memberships felt, hands down, Matthew Rodman not only met the requirements but exceeded them.”

During the time when Rodman’s children attended the Paul Revere School, Rodman started a program that arranged for parent-sponsored chartered buses to and from the students’ homes and school according to Holly Davis.

Rodman is also the President of the Palisades Americanism Parade Association and he has been in charge of the volunteers involved in producing the annual 4th of July fireworks displays and parades.

Rodman said, as quoted by the Palisadian Post, “I was very moved by the surprise acknowledgment for the work that I do in the community with the July 4th events. It never occurred to me that the Rotary would award and give recognition to somebody that is not a typical business in the Palisades so I was flattered to receive it.

Rodman added, as quoted by the Palisadian Post, “[This year] we are going to have an exciting 4th of July, starting with the Palisades Run in the morning and ending with the fireworks in the evening.”

The award comes with a $500 monetary award for the honoree and Rodman donated the money to Palisades High. Rodman was also made an honorary member of the Palisades Rotary Club.

Holly Davis stated finally that “Rotary is looking to a successful 2022 in all its endeavors and looking forward to adding new members as we move forward. Rotary pre-pandemic, and now going forward, travels yearly to countries around the world who need water, cooking ovens … and brings money and the needed appliances and hope.”