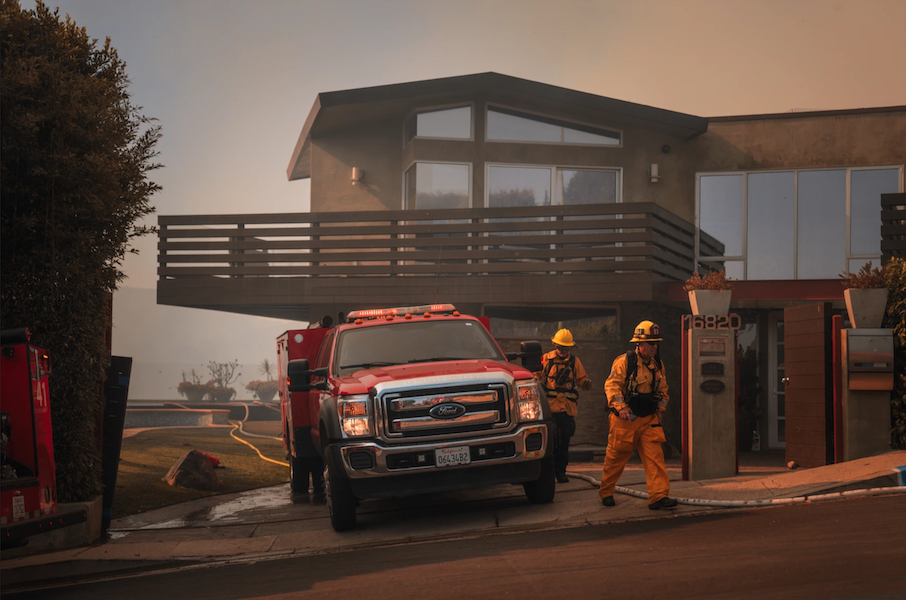 After relentless work by firefighters, the Palisades Fire is at 55 percent containment as of 7:30 p.m. Wednesday but with Santa Ana winds expected to bring gusts up to 50 MPH the Los Angeles Fire Department is advising residents to be prepared to evacuate.

As of Wednesday night, the structures previously threatened and evacuated remains at 628, while structures with damage is reported at eight, according to the LAPD. There has been no loss of human life or structures destroyed by this blaze.

“Due to firefighter’s relentless work over the past three days, containment of the fire perimeter was increased from 30% to 55%. Hand Crews from multiple agencies including LAFD Crew 3, USFS [US Forest Service] and LACoFD performed the treacherous work of hiking the cliff-like, rocky terrain to strengthen containment lines. Firefighters will remain on scene overnight, surrounding the 45 acre burn footprint, to ensure remaining hot spots do not spread outside our containment lines,” said Los Angeles Fire Department (LAFD) public information officer Brian Humphrey.

At 8 p.m. Monday, all evacuation orders were lifted from the Palisades Fire but the LAFD is advising residents who return home to be on alert.

The Santa Ana wind event expected early Thursday morning through Friday afternoon is anticipated to bring wind gusts 35-50 MPH. This wind, along with increased temperatures, brings critically low relative humidity to the vegetation that likely has not last burned since 1938.

“For those of living near current wildfire incidents, be vigilant and keep your TV or radio on. Make certain you have your family critical papers, phone data, pets and other valuables ready to evacuate if so directed.”

“The Los Angeles Fire Department encourages you to be prepared in the event of a brush fire. For those of living near current wildfire incidents, be vigilant and keep your TV or radio on. Make certain you have your family critical papers, phone data, pets and other valuables ready to evacuate if so directed,” Humphrey said.

628 structures have been previously threatened and evacuated. 247 total personnel are assigned to the fire across a range of agencies.

“Pacific Palisades Community Council (PPCC) offers a grateful thank you to all of the first responders who protected our community…We also saw many instances of neighbors helping neighbors in the threatened area and in the greater Palisades,” PPCC said in a statement. “This is not an isolated incident or threat. Wildfires are a way of life in Pacific Palisades.  The last super fire that burned through the Santa Monica Mountains interface with Pacific Palisades and Brentwood was 1978, when many homes were lost and St. Matthews Church burned to the ground.  Much of the native growth has been untouched by fire since then.”

For more information on preparing to evacuate, visit https://www.lafd.org/ready-set-go.