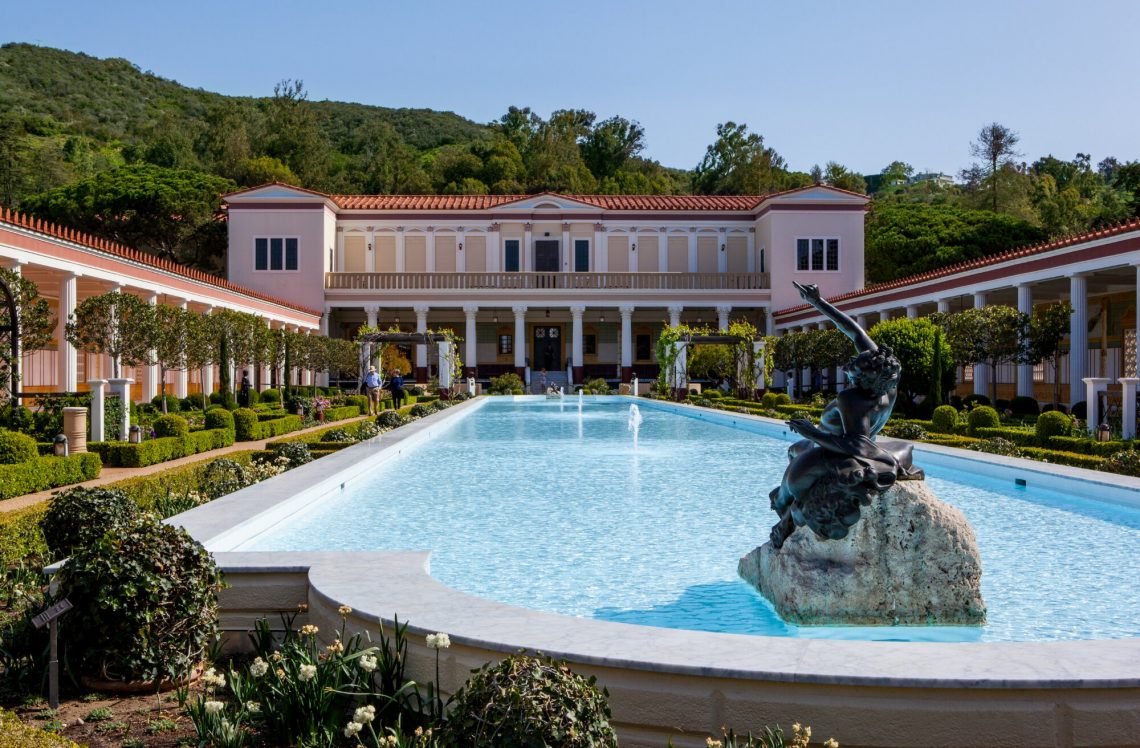 President Joe Biden and First Lady Dr. Jill Biden hosted more than 20 heads of state from countries across the Western Hemisphere at the Getty Villa for a formal state dinner on June 9.

The Villa dinner was the capstone social event of the Summit for the heads of state, the location being a recommendation of the First Lady. The rare event—one of few in recent history in the U.S. involving so many foreign leaders—was held in the Villa’s main outdoor garden. The guests were surrounded by the Getty Villa’s recreation of a first-century Roman villa with Corinthian and Doric columns, Mediterranean plants, mosaic floors, and colorful trompe-I’œil wall frescos.

The Getty Events Team plans hundreds of events each year including seated dinners, concerts, theatrical performances, artist demonstrations, lectures, symposia, and family festivals but planning a dinner for a sitting president and world leaders from across the Western Hemisphere was a first.

Heads of states and their partners attended a reception in the Villa inner peristyle and then were seated for dinner in the outer peristyle. The supporting staff included hundreds of people from various agencies, including more than 200 staff connected to Getty. The event was covered by about 45 journalists from more than 20 foreign press agencies, as well as the White House travel press pool.

The dignitaries were in L.A. for the Summit of Americas, which brings together leaders from the countries of North, South, and Central America, and the Caribbean to address shared challenges and opportunities. The Summit meetings were held at the downtown Los Angeles Convention Center, and marked the first time the Summit was held in the United States since it was held in Miami in 1994.

In just two months all of the details came together including menu planning, floral design, an in-person tasting, and décor meeting with state department and White House staff; multiple secret service advance visits; and the closing of the Villa museum for the week. A 15-person Getty team of operations staff from events, facilities, grounds, security, human resources, Getty digital, and communications began meeting weekly, and then daily, in the lead-up to the event. “It was truly a team effort,” said Abrams.

After a tasting with State Department Protocol Office officials, Getty’s catering vendor Bon Appétit was selected to prepare the meal with Executive Chef Fernando Cayanan at the helm. “I am truly grateful and humbled to be given the opportunity to craft a menu for this event. Everyone’s been working so hard to make this happen,” said Cayanan. “I am proud to be part of a collaborative effort and provide a meal that represents our values in responsible cooking, our partnership with the Getty, and quite simply, the joy in what we do. What an honor and experience!”

Abrams and many Getty teams worked with the U.S. State Department, the White House, and Los Angeles Mayor’s office on the details. The Getty team coordinated deliveries and load-in of equipment, multiple motorcades, and accommodations for all the essential staff on site.
“Our security team worked for several weeks planning and preparing for the event,” said Bob Combs, director of security and visitor services at Getty. “There was a significant level of coordination with a number of different agencies. We conducted many site walks and ensured that all of the agencies were familiar with the property and buildings, along with the variety of security and life safety equipment and systems that we employ on-site. We also developed contingency plans for a variety of scenarios and conducted specialized training of our staff. It was an honor to have a role in an event of this magnitude,”

“In the end, it was the expertise and dedicated support of the Getty’s events team, security, facilities, grounds, communications, human resources, Getty digital and catering staff all coming together to make this event happen,” said Abrams.

And it happened without a hitch.

The evening of the dinner, Pacific Coast Highway and connecting streets were closed for over an hour while more than two dozen motorcades came through.

When attendees arrived, they were greeted at the Villa Loggia by a formal military salute and flag cordon. Then they walked through the Villa herb garden and entered the atrium, posing for a photograph with President Biden and the First Lady on their way to the reception in the Inner Peristyle.

After a reception, the group of dignitaries gathered for a sit-down dinner in the outer peristyle garden among the colonnades which parallel the pool in the center of the Villa’s main garden. Chefs used local, sustainable, and regional ingredients, and California wines were served. White House honey was drizzled on the hors d’œuvres and white chocolate medallions embossed with the presidential seal decorated the dessert plates.

To cap off the dinner, guests enjoyed a performance under the stars in the Outdoor Classical Theater by The Presidents Own, the United States Marine Band that include vocalists, an orchestra, and 17 trumpeters, as well as the U.S. Military Color Guard carrying the flags of all of the participating Western Hemisphere nations.

Of course, it was a lovely summer evening on the Pacific Palisades coast with just the right amount of seaside breeze. On their way out, attendees each received special souvenirs from the Getty Museum Store.

Even with the patriotism and pomp, and the lighting and stately table, the Villa maintained its timelessness. “The White House didn’t want to take away from the beauty of the Villa,” said Abrams. “They really wanted to let the guests soak it all in and highlight the museum.”
At the end of the night, the president and first lady spent some time chatting and graciously thanking Getty’s events, Bon Appétit, security, and facilities teams for all their hard work.