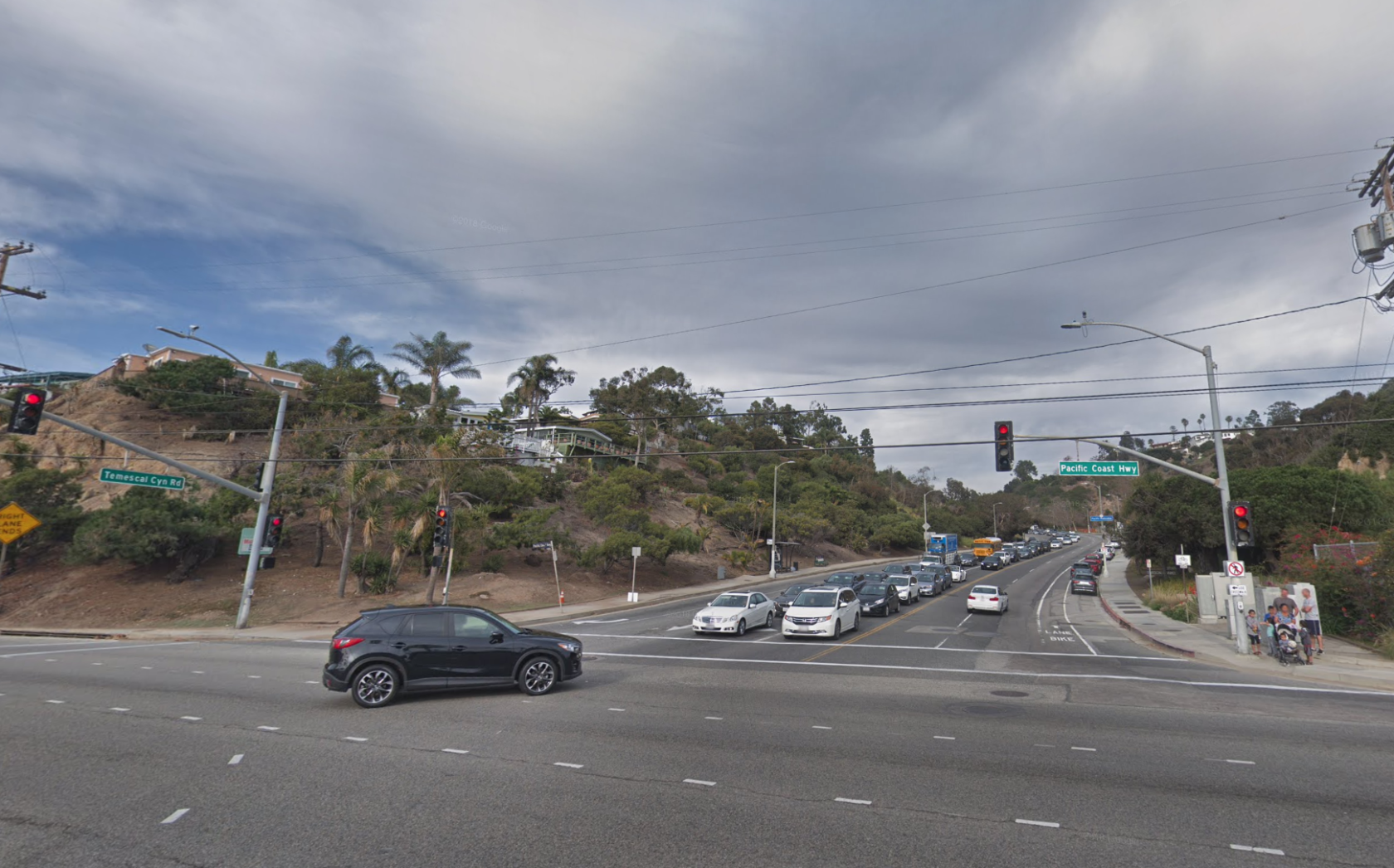 LADOT ranks Temescal and PCH as one of city’s most dangerous intersection.

By Sam Catanzaro and Keldine Hull

Compared to much of Los Angeles, Pacific Palisades is a safe place to live. With low crime rates and ample private security, the Palisades is the type of community where many parents may feel safe letting their kids walk to school alone. There is one aspect of the area, however, where the Palisades ranks among the most hazardous parts of Los Angeles: dangerous intersections.

According to the Los Angeles Department of Transportation (LADOT) one of the most dangerous intersections in LA is Pacific Coast Highway and Temescal Canyon Road. This intersection, just down the hill from Palisades Charter High School, was ranked the number one priority intersection in a recent citywide survey.

These findings are part of LA Mayor Eric Garcetti’s Vision Zero campaign, aimed at reducing the number of pedestrian fatalities in the city to zero by 2025.  By identifying the most dangerous intersections, LADOT’s findings help lawmakers prioritize where to allocate resources as they develop their annual budget.

“We have identified some of the highest-needs intersections in Los Angeles for not just pedestrians, but all road users. Improvements to those intersections have been prioritized into our work plan for this year,” said Oliver Hou, Transportation Engineering Associate for the City of Los Angeles.

A report of 2019’s Priority Intersections within the City of Los Angeles lists 60 intersections and in addition, PCH and Temescal Canyon Road, LADOT also includes PCH and Sunset Boulevard in Pacific Palisades.

Other hazardous intersections on the Westside include Pacific Avenue and Rose Avenue, Lincoln Boulevard and Washington Boulevard in Venice, and Ocean Avenue and Colorado Avenue at the entrance to Santa Monica Pier.

Initiatives LADOT is taking to address the safety of these hazardous locations include, Leading Pedestrian Interval (LPI) crossing lights, speed feedback signs, crosswalk upgrades and intersection tightenings. LPI intersections, which let pedestrians and cyclists begin crossing before vehicles, are something the City of Santa Monica has implemented and have found effective. In Santa Monica, LPIs gives those on foot a three-to-seven second head start when entering an intersection, enhancing visibility while maintaining their right-of-way over turning vehicles. According to the City of Santa Monica Planning and Community Development Department, LPIs have been proven to reduce pedestrian-vehicle collisions by approximately 60 percent.

While the City has implemented Vision Zero to reduce traffic involved fatalities, organizations like Los Angeles Walks aim to do their part to keep all residents safe as well.

As the City continues its efforts to reduced traffic-related injuries and fatalities, there are some simple, basic steps that residents can take to ensure their own safety.

“Stop and look both ways before entering a street, or even a driveway/parking lot. Make eye contact and make sure the driver sees you before crossing in front of a car. As part of our education efforts for children, especially those walking to school: Look left, right and left again before entering the street.”